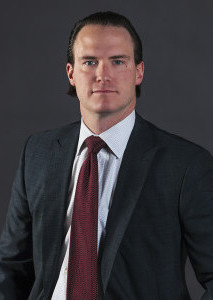 Thomas Lyden is a founding partner and head of Washington operations at Keating & Lyden, LLC. Thomas' passion for litigation shines through as he advocates for clients on the front lines. Thomas focuses his practice on criminal defense, debtor rights and relief, appeals and litigation. Thomas has been presenting cases to juries and judges since being admitted to practice.

Thomas began working in criminal law in the public sector. In 2009, Thomas became a supervising attorney for misdemeanor defense attorneys in Whatcom County. Thomas oversaw the defense of over a thousand defendants each year while individually representing hundreds of defendants in criminal court.

Thomas was named a Super Lawyer Rising Star in 2013, 2014 and 2015 in the field of DUI defense by Washington Law and Politics Super Lawyers

Thomas works to maintain knowledge of the most cutting-edge technology and defense strategies in the field of DUI defense.

Thomas founded his private practice in 2012 and later began working with Robert Keating to form Keating & Lyden, LLC. Finally realizing a dream that began when they met, Keating and Lyden strive to be a full service law firm in the modern era. Thomas has expanded his knowledge base to incorporate business law, debtor/creditor rights, landlord/tenant litigation and appeals. Thomas is proud to be able to give his clients broad access to legal problem solving at Keating & Lyden, LLC.